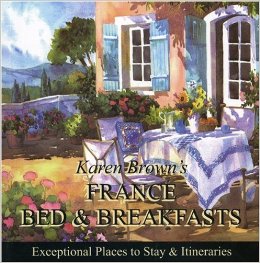 www.karenbrown.com
Le Lavandin has been included in the 2007-2010 editions of Karen Brown’s France B&B guide books.

Le Lavandin is the fruit of one woman’s passion for Provence and the French savoir-vivre. Georgia, an American, has created a space that is a breathtaking combination of traditional Provencal architecture and contemporary French design and furnishings. In doing so, she offers her guests a piece of heaven. She loves flowers, books, music and cooking. You will be captivated by her garden: a lavender field, a rose garden with over 250 bushes, a flower cutting garden, a potager and an olive grove with a beautiful labyrinth in its’ midst. There are also four little sitting areas in the gardens in which to relax plus a petanque (bocce ball) court. On the property are the main house, home to your host, and a separate guest house to insure privacy and independence. The guests’ house enjoys an outside “summer kitchen;” a contemporary living-room with a library that faces the terrace with soft, colorful cushioned furniture, and four beautiful bedrooms each with its own bath and terrace. All rooms have terracotta floors, handmade doors, contemporary décor and a library. If you prefer a larger space, ask for the studio with kitchenette—a large room with miniature sofas and a big library. This place will capture your heart.

Rebirth in France by Tom Wharton

Leaving a successful Utah real estate career to open a bed-and-breakfast in southern France might seem out of the ordinary. But Georgia Ball, who moved to Salt Lake City in the 1960s and was a founding partner in the Ramsey Group in 1984, is no ordinary woman.

“Everybody thought I was absolutely crazy except me,” said Ball, who opened her Le Lavandin guesthouse on June 1. “I probably was crazy. Nothing was easy, though everything fell into place.”

Consider the facts: Ball did not speak French, had to supervise construction of a four-bedroom guesthouse, had only stayed in one bed-and-breakfast in her life and moved to France during one of the worst periods of U.S.-Franco relations in history. There was reason to think Ball might have been a bit wacky.

Ball’s primary motivation to move to France was the fact that her daughter and two young grandchildren lived in Grenoble. She began trying to purchase property in October of 2001 and moved in January of 2003.

She had not planned to build a completely new guesthouse, but when the old one collapsed on Feb. 9, she needed to construct a replacement quickly. That fact was complicated by her lack of French, though she managed to learn enough construction language to communicate with the workers who, at one point, numbered 20.

“They worked seven days a week,” said Ball. “It was an incredible experience for me. I fell in love with all of them and they with me. We had a common goal and it had to happen.”

The guesthouse includes a salon, living room and four spacious bedrooms, each with a terrace and private bath. It is connected to the original studio, which can sleep two adults and two small children.

The facility also includes a summer kitchen that is located outside, allowing visitors to barbecue or keep their drinks in a small refrigerator.

The Provence area includes hundreds of vineyards, fields filled with colorful sunflowers, aromatic lavender farms and farmland that produces most of France’s vegetables.

The bed-and-breakfast is located near a pine forest and an olive tree grove. Farmers markets are located everywhere, including scenic Avignon, which is the closest city to Ball’s inn.

“You buy a carrot that came out of the ground that day,” said Ball. “I have never eaten so well in my life.”

The former Utahn also had no problem getting along with her French neighbors, even at the height of America’s anti-French attitude at the start of the war in Iraq.

“I was all over the area buying things with my fractured French that made it obvious I was an American,” she said. “I did not have one hint of animosity. It was quite the opposite. People bent over backward to be of assistance.

“They would say things like ‘Bush is making it hard for Americans’ or ‘do you think Bush is a good president?’ We had some frank discussions. But it was embarrassing to me that Americans were pouring out French wine and changing the name of french fries on the menu. The French would not do anything like that.”

About 90 percent of Ball’s first-year guests came from Utah, a figure that has dropped to 70 percent so far this year.

Louis Borgenicht was one of those, and he came away impressed.

“It’s a great place,” said the Salt Lake City resident. “It is a bucolic setting with lavender fields, olive trees and a pool. She has done an amazing job in terms of decorative comfort for guests. The rooms are tasteful and elegant. It is a reflection of her sense of style, which is pretty amazing. Nobody could believe she got everything done as quickly as she did.”

But Borgenicht, one of Ball’s many Utah friends, was not surprised that she pulled off the move.

Ball is taking advantage of her Utah connections to use her inn for a variety of workshops this year.

Chef Jane Otto will present “Cooking in Provence” Aug. 8-14. Eric DeBonis, another Utah chef, will present “A Gastronomic Tour of the South of France” Sept. 12-18. Painter Connie Borup is presenting “Painting in Provence” May 30 to June 5. And Utah writers David Kranes and Jeff Metcalf will teach creative writing from June 13-19 and from June 20-26 this year.

“I grew up as a military daughter and lived everywhere,” she said. “That is one of the reasons I could pick up my roots and come here. . . . I miss my friends, but I don’t ache to go back, not for one second.”

Before and After: Provence Style — By Louis Borgenicht

This is a story about before and after: how a successful Salt Lake City realtor picked up her roots and moved to Provence to be near her daughter and grandchildren and in the process opened a bed-and-breakfast in the town of Pernes-les-Fontaines in near record time.